A Tangle of Webs

A while ago I started experimenting with an algorithm for creating web-like structures in two dimensions. Arguably the results are a little strange when compared to most spider webs, but interesting nonetheless. The image below is a picture of a plotter drawing made using a variation of the following algorithm.

This algorithms relies on a graph structure. A triangle can be viewed as a graph consisting of three nodes A, B and C. Connected with three edges AB, BC and CA.

We need to be able to split edges in the graph. Assuming we have a single edge, CD. We can split this edge by inserting a new node, E, somewhere between C and D. To do this we first delete CD, then add two new edges CE and ED.

We will also be using this graph structure to apply forces between connected nodes. In this use case the edges are undirected, which means that means that an edge, CE, will cause C to be affected by E and E to be equally affected by C, except in the opposite direction. More on this later.

Now that we know the basic graph manipulations, the procedure for growing the web structure is the following:

Implementing the algorithm above will yield some kind of web structure. To make it more organic, we can apply interaction between connected nodes by assuming that the edges are elastic bands. Then we simulate that the bands try to retract back to some comfortable length.

A possible version of this can be achieved by doing the following for each node:

When you have done this for all nodes, you can update the node positions to their corresponding new position. Make sure you don't change the current node positions until you are done calculating all the elastic band forces. Otherwise you will affect the end result. 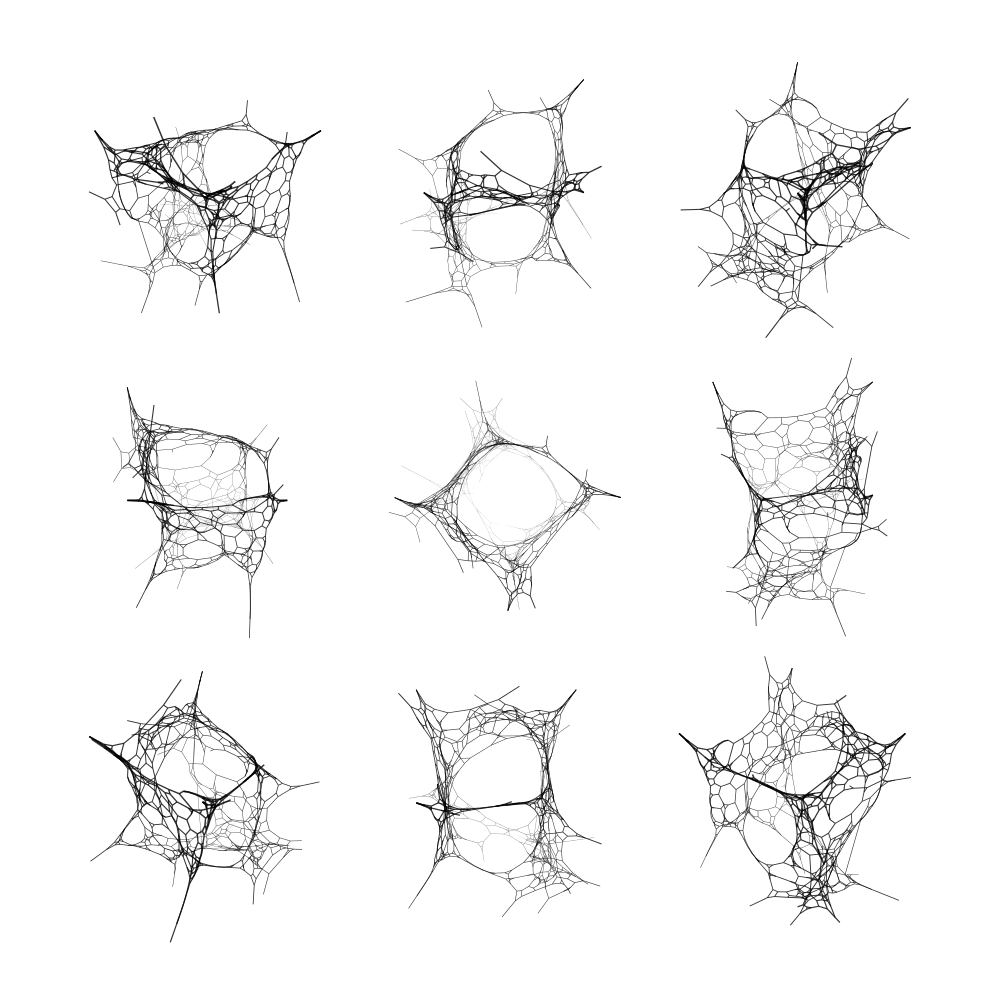 A variation of the same algorithm in 3D

To put it all together, you should create a loop that performs the elastic band calculations for every step. Then insert new edges every so often.

One more thing to consider is to always leave the nodes of the initial edges in their original position. If you don't you will end up with the web shrinking a lot; depending on how long your elastic bands are. There are a lot of other things to tweak in this algorithm. I will leave that to you.

Extending this idea to three dimensions is not too complicated. You can read more in the next post.